Recently, Gordon Brown, Prime Minister, launched a campaign aimed at recognising the work of ‘local heroes’ in communities throughout the UK.  At some point during their time as an MP, each of them is invited to bring a member of the community to meet the Prime Minister to recognise them for their commitment to their community.

On Thursday 28th January, Phil Hope, MP, invited David Tristram, to 10 Downing Street for an ‘MP and their Local Heroes’ reception.  Phil Hope said, “I wanted to thank David Tristram on behalf of the students, parents and staff of Kingswood and more broadly on behalf of the people of Corby for the enormous commitment he has made to the local young people.”

David Tristram said, “I was both surprised and flattered to be asked to accompany Phil Hope, MP, to Downing Street. After all, it’s not every day that ordinary mortals get the chance to go beyond the ‘black door’.  Phil Hope asked me to go because he and his constituency team were impressed with the way in which we managed the closure of OLPJ and the assimilation of the students.  In fact, I was there to represent the whole school and Phil Hope and Gordon Brown wanted me to pass on their gratitude for the way in which we managed a difficult situation.  It was fascinating to get a glimpse inside No 10 – to see the Cabinet Room and the staircase with the pictures of every Prime Minister the country has ever had – and, of course, it was an honour to meet Gordon Brown himself.  I also got a glimpse of just what a busy and exhausting life Phil Hope and other politicians actually lead. A really interesting experience!” 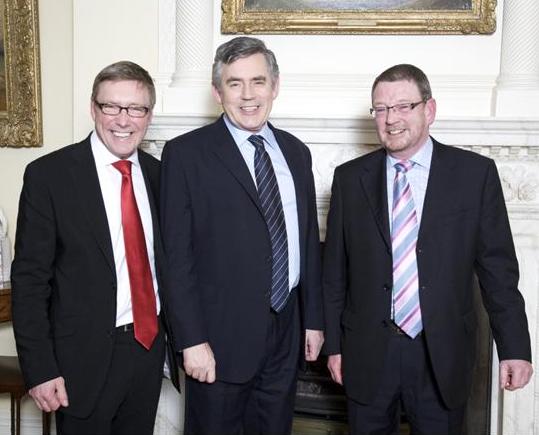